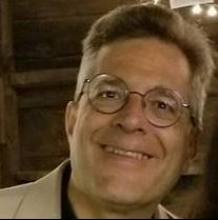 My name is Paul DeRienzo and I’m on the news staff at WBAI. I began my program Trump Watch in February 2017 and began hosting the news in October 2018. I host the news regularly on Wednesday and Thursday. I want to be elected to the WBAI board to advocate for a strong and independent news department.

In these days when momentous political issues are being debated in the streets, WBAI must be secure and independent. It’s voice will be more important than ever in the weeks and months to come.

I want to see news that picks up where the award winning WBAI news left off before Pacifica’s economic crisis forced it from the air. The news has been and remains a key element in attracting new listeners who might also want to become members. As a staff member i will represent the often ignored paid staffers who work for minimal salary and strive mightily to keep WBAI broadcasting. The board ops, the engineers and other employees who are often constrained by workplace discipline from saying what’s on their minds. The unpaid staff, those who make a herculean effort to support WBAI in these times of massive staff cutbacks. The labor of these regular and committed volunteers should be respected and honored. While all reporters had an ultimate goal of serving the interests of listeners they must also stand alone when reporting facts that might not always be comfortable to report. We must support our producers even when we disagree with them. We don’t need an echo chamber at WBAI in these times.

I promise to protect and cherish WBAI and to work towards expanding out audience without treating programmers unfairly. It’s my firm belief that WBAI’s salvation is within the organization itself, the veteran programmers, the movements that rely on WBAI for information and the Pacifica foundation. Old disputes should be squirreled away for another day. It’s time for all hands on deck if we want a radio station in NYC to argue over on the future. I look forward to working together with those who want to see WBAI succeed. We can save the station and recommit to our values if we really want to.